And more…
GEMFOREX continues to pursue a comfortable environment of traders, and DAX（GER30） can be used with confidence by beginners and those experienced people in Forex under the MT 4 environment familiar to DAX（GER30）.

DAX (GER 30) is a stock index that appeared in FSE in 1988 with the reference price set at 1000 in 1987. Originally inherited the stock index in Germany, it is the GER 30 consisting of 30 companies out of the best German companies. By the way, all 30 companies are listed on the Frankfurt Stock Exchange.

DAX is called the German Stock Index in Japan. Germany is the fourth largest economy in the world and is the largest economic power in Europe. Therefore, in Europe, it is one of the indices globally watched alongside the French economic index CAC 40 and British economic index FTSE 100. It is a stock index that CAD trading is possible even in Japan. Periodic review of constituent stocks is done once a year.

Transition in price of DAX 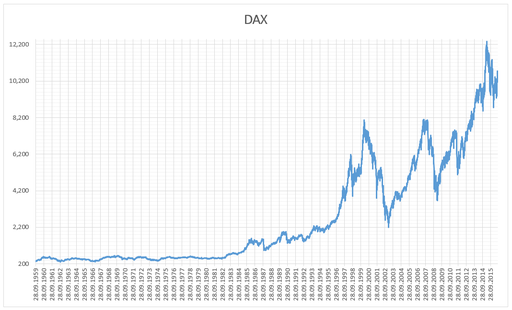 DAX has grown rapidly in the years since birth. In 1993, due to the influence of the bubble, exceeding 2000 points, exceeding 5000 points in 1998 when the Internet began to spread rapidly. The momentum did not stop even in the 21st century, and in 2000 it recorded the highest ever recorded 7,500 points.

However, after putting the highest price in 2000, it turns into a declining trend due to the collapse of dotcom bubble. In 2003 it fell to 2,500 points, and the economy became cold worldwide. As the economy turns up again, the stock index turns to rise. Before the financial crisis of 2008 occurred it had recovered to 7,500 points. However, immediately after the global financial crisis has occurred, it has collapsed and records the highest crash range in the past.

It temporarily declined due to the global financial crisis but once again it began to rise and it is worth more than 10,000 points in 2015. Looking at the history of DAX, a periodic big crash is occurring. In terms of average data, the cycle of crash is about 6 years and 5 months. There are also ways to predict from the past price movements in the stock index forecasting method.

The falling range is the largest due to the collapse of the IT bubble in 2000, and it has recorded a decline rate of 72% in three years. In the short term, it recorded a decline rate of 50% in one year at the time of the Lehman shock that occurred in 2008. Investors are predicting that a declining rate exceeding 20% ​​occurs with a short span, so that there is a high probability that a large decline will occur in the near future.

Brands that make up DAX

Speaking of German companies, I think that many people imagine the automobile industry. However, the field of companies with large market capitalization at DAX is chemicals. World famous chemical companies such as Bayer and BASF are named for DAX. There are companies in the fields of chemistry and medicine such as Merck, Henkel, Covestro, Baiersdorf.

The automobile industry is also an important position in constructing DAX. BMW, Daimler, Volkswagen and other automobile manufacturers familiar in Japan are included. In addition, Adidas popular sporting goods brand in Japan is also one of the constituents of DAX. Because there are many companies deeply related to Japan, DAX is also characterized as having a high relevance to the Japanese economy.

DAX in the future

Since we export a lot, if the economy of the related country is sluggish, there is also a risk that the export will decrease and have a big On the other hand, there is a history that has recovered even if it fell greatly, so it can be said that it is a stable stock index from a broad perspective